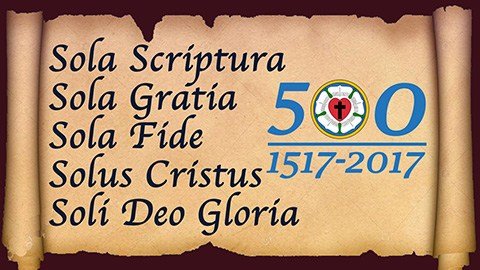 in Church, Encouragement, Strength, Worth

Galatians 5:1 —  It is for freedom that Christ has set us free. Stand firm, then, and do not let yourselves be burdened again by a yoke of slavery.
ALONE

Do you want to be alone?  Our first reaction is probably “no”.  Loneliness can be a hard thing.

Young Martin Luther was all alone on his walk through the forest when a horrific thunderstorm broke.  As Luther’s life flashed before his eyes and thoughts of death and standing before God passed within him, Luther realized he was not alone.  He was accompanied by a guilty conscience and a terror of judgment for his sin.

Luther determined that if he lived through the storm, he would become a monk.  He would run away from the world and by dedicating himself to obedience in the monastery he might find peace.  Luther’s guilt and fear followed him there.  No matter what Luther did, he could not get rid of the damning accusations within his head.

Until God spoke.  During Luther’s study of God’s Word, Luther learned of a beautiful message from God written long before but forgotten by the church of his day.  God told Martin Luther that Jesus Christ had died in order to atone for all sins and establish peace between God and sinner.  Christ’s death set sinners free from the curse of the law by becoming that curse for us.  Freedom from the guilt of sin and the penalty of hell was a gift Christ won and was Luther’s, not by works but by faith alone.

Luther said that it was like the gates of heaven opened for him in his heart when he first understood the gospel.  God had freed him from the plaguing accusations in his mind and the nagging fears of judgment.  In Christ, Luther finally found a Mighty Fortress where he could be free and alone and at peace with God.

Satan loves to be our constant accuser.  Satan wants us to walk through life always accompanied by guilt, despair, fear, and stress.

If you long to be alone from Satan’s torments, come to Christ.  No guilt in life.  No fear in death.  This is the power of Christ for you and me.  He is our Mighty Fortress in whom we find freedom, quietness, and peace.

What is Permanent — Midweek Message